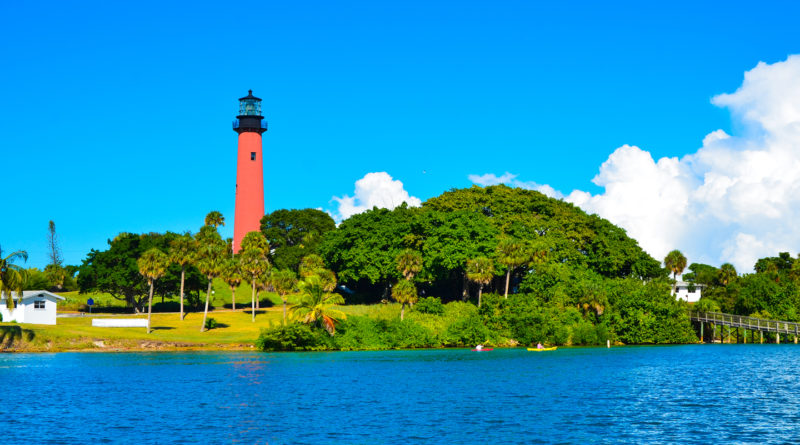 In 1853 Congress authorized the building of a lighthouse at Jupiter Inlet. Jupiter was one of six Florida lighthouse projects assigned to a young Army Lieutenant named George Gordon Meade, born in Cadiz, Spain. A decade later, he would famously defeat Robert E. Lee at the Battle of Gettysburg as a General of the Union Army. Meade selected the site and created the original design for the Jupiter Inlet Lighthouse. His successor, Lieutenant William Raynolds, improved on the final design by adding height and a double wall. Edward Yorke, a civilian, oversaw construction of the tower which was completed in May 1860.

Jupiter Lighthouse Construction, The Civil War and Beyond

Soon after the lighthouse was authorized, engineers discovered that a storm had closed the inlet. The inside waters became stagnant, breeding malaria. Moreover, the unarmed work crews were delayed by the eruption of the Third Seminole Indian War. When the project finally got underway, construction materials had to be brought down the Indian River in small, shallow-draft barges. The majority of work on the 108-foot lighthouse, adjacent oil house, and keepers’ house were completed in less than six months. The tower was officially lit on July 10, 1860.

After the onset of the American Civil War, an assistant keeper and other local Confederate sympathizers disabled the light, which remained dark throughout the Civil War. The light was relit five years later after the war ended. Among the new assistant keepers was James Armour, who had helped recover the parts and supplies removed from the lighthouse. In December 1869, Armour was promoted to Head Keeper, a position he held until retiring in 1906 – a remarkable 40 years of service as a lighthouse keeper.

From 1860 to 1939, more than 70 different keepers served for some period of time at the Jupiter Inlet Lighthouse. In 1939, the civilian lighthouse service merged with the Coast Guard. Keeper Charles Seabrook and his assistants chose to enlist in the Coast Guard. Military personnel remained keepers of the lighthouse until its automation in 1987. The lighthouse remains an active public Aid to Navigation, with 1 of only 13 active 1st Order Fresnel lenses in the entire United States.