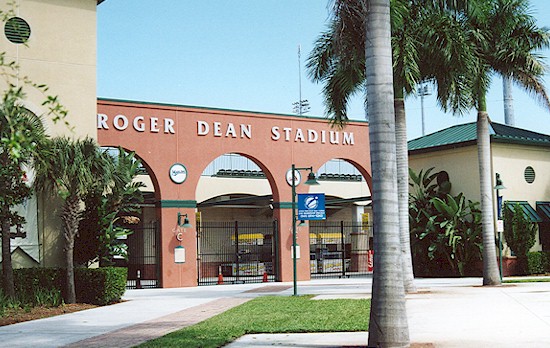 The Roger Dean Stadium complex is the only stadium in the country to host four minor league teams:

Roger Dean Stadium is one of only two stadiums in Florida to host two Major League Baseball teams annually for Spring Training:

The teams share the main stadium where the games are played. However, the teams have their own practice fields, outdoor batting cages, several pitching mounds, and state-of-the-art conditioning rooms.

In September 2012, the stadium hosted the qualifying round for the 2013 World Baseball Classic. Spain, France, Israel, and South Africa took part in the qualifier.

Who is Roger Dean?
Roger Houston Dean was born in 1915 and served as a naval officer in World War II. He started his career as an auto dealer with Ford Motor Company in 1947 and became one of the first mega-dealers in the United States.

Along with his hard work and dedication, Mr. Dean’s success was achieved by his on-going goal to create “customers for life” by selling a quality product at a fair price and by providing the best customer service possible. These qualities and underlying goals have been passed on to Mr. Dean’s daughter, Patty Dean, and have been instilled in the three dealerships that she owns today – Roger Dean Chevrolet of West Palm Beach, Roger Dean Chevrolet of Cape Coral and Roger Dean Buick GMC of Fort Pierce.

The Roger Dean legacy and tradition of excellence lives on today through Patty Dean. It is this tradition and her core values of courtesy, honesty, conviction and faith that make Roger Dean Stadium proud to make Roger Dean the naming rights partner for our beautiful baseball complex.